AN INTRODUCTION TO TRADITIONAL KYRGYZ CUISINE 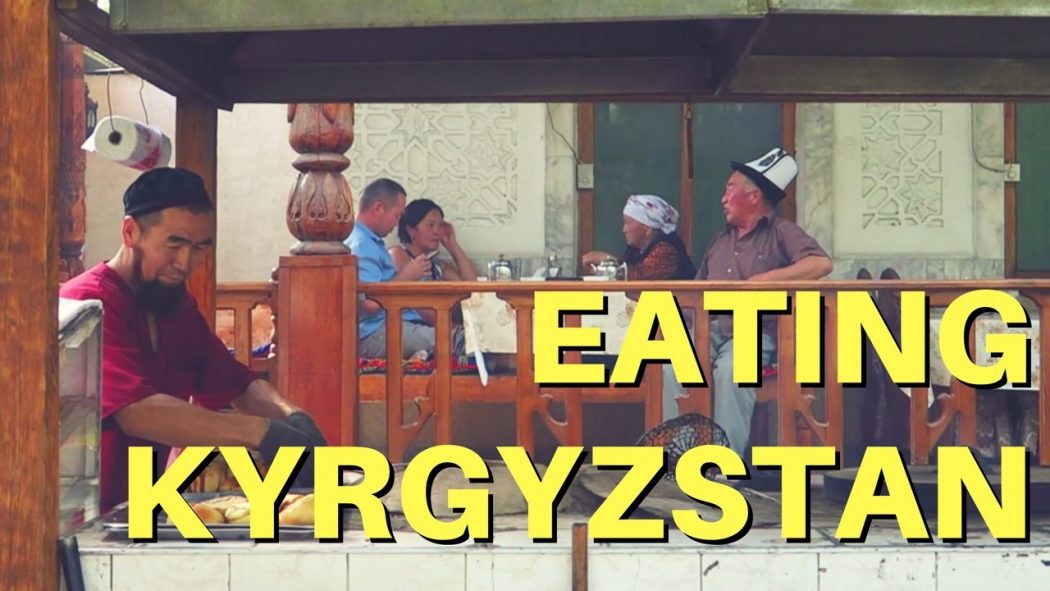 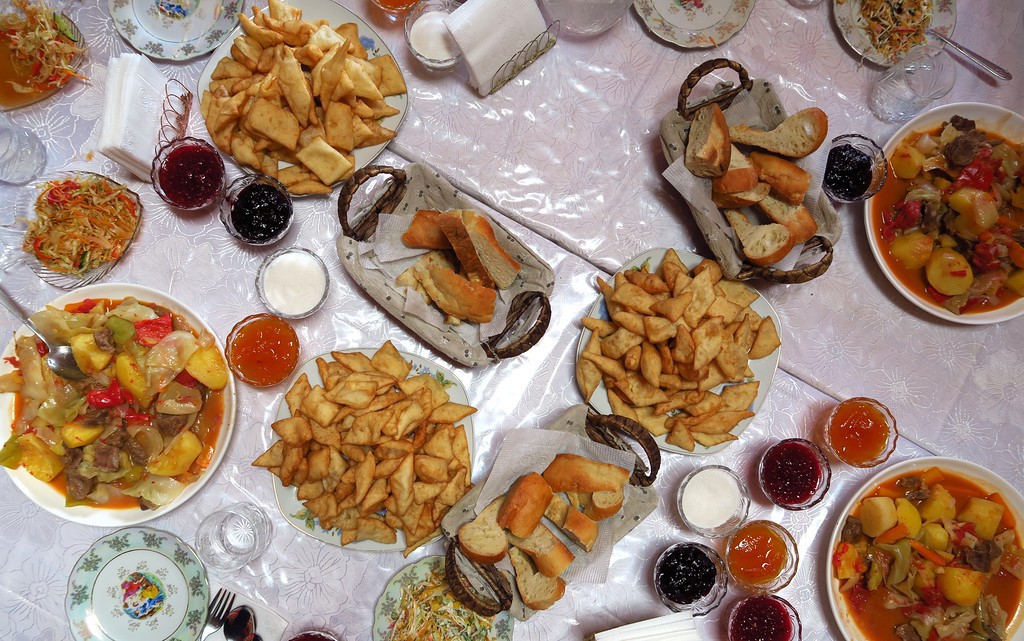 Often when I travel to a new country I have the opportunity to sample the local cuisine in some way, shape or form prior to arrival. Before heading to South Korea for the first time I had bibimbap, samgyeopsal and tteokbokki numerous times in Canada. Prior to visiting Vietnam I already had slurped countless bowls of photos in Vietnamese restaurants all over the world. However, on our recent trip to Kyrgyzstan to cover the World Nomad Games, I arrived not knowing anything about Kyrgyz cuisine; in many ways this was refreshing.

Traditional Kyrgyz food is meat intensive with beef, mutton and horse meat being staples along with numerous types of dairy products. Cooking techniques can be traced back to the nation’s nomadic way of life. Geographically located in the heart of Central Asia, Kyrgyzstan historically featured three major routes of the Silk Road gaining influence from cuisine from nearby neighbors such as China and present day Kazakhstan. 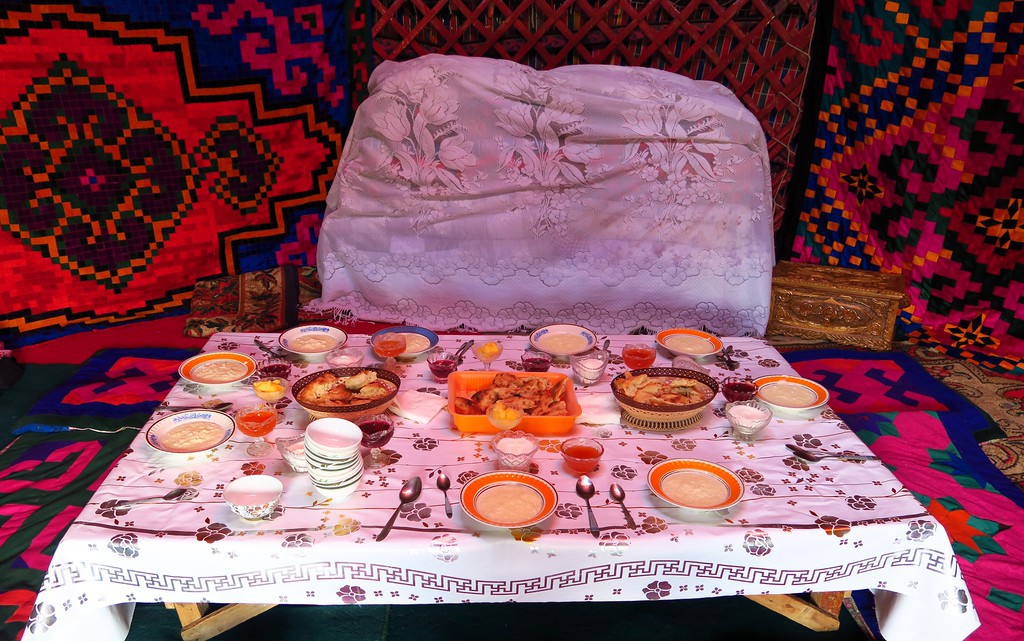 We were fortunate enough to spend a considerable amount of time gallivanting across the country visiting remote yurts in the countryside and sampling some of the most popular dishes in restaurants in Bishkek. The following is an introduction to traditional Kyrgyz cuisine featuring some must-try dishes. 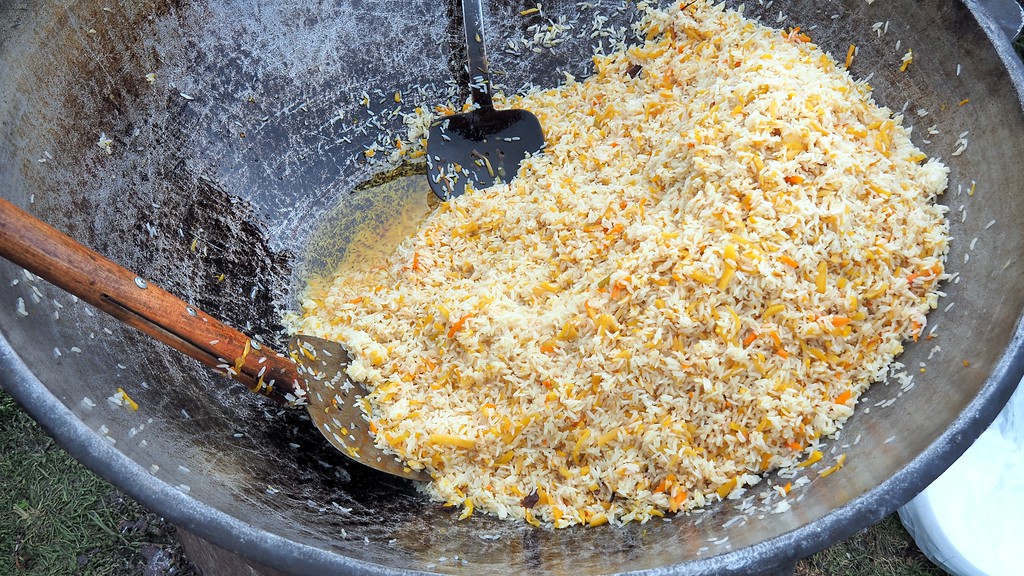 Paloo (палоо) is a rice dish typically featuring garlic, chives, shredded carrots, hot peppers and various other vegetables along with pieces of meat (chicken, mutton, beef) fried together in a massive qazan (cast-iron cauldron). Plov, is a staple dish in Central Asian cuisine and every country in the region has its own unique way of preparing it. Fortunately, I had the opportunity to sample it numerous times. My favourite experience was having paloo prepared right before my eyes during the World Nomad Games. It was one dish I instantly fell in love with and if you’re generally a fan of Chinese-style fried rice you’ll likely find this to be amicable to your taste-buds.

My favorite meal in Kyrgystan was Lagman (лағмон). This very popular noodle dishes can served fried or in a soup and I ate it more than any other dish during our three week stay in the country. This dish features thick noodles covered in chopped peppers and various other kinds of vegetables, all coated in a spicy vinegar-base sauce. Considered an Uyghur dish with Chinese roots lagman is a staple dish you’ll find in most Kyrgyz restaurants. Try it in a soup and fried and let me know which one you prefer. I like both but when push comes to shove I prefer it fried.

The first Kyrgyz food I tried upon arrival in Bishkek was Manti (манты). These steamed dumplings can be stuffed with pumpkin, lamb, beef or potatoes, and they reminded me of Korean mandu and Tibetan momo. They’re typically served as a side dish as opposed to being a main dish, but whenever they were in front of me I kept popping them in one after the other. If I had to recommend one kind, I’d say try the pumpkin ones.

Have you ever tried samosas before? If so, you’ll find Samsa, a Central Asian staple, to be quite similar. These baked pockets consist of layered pastry dough and are often stuffed with lamb, cheese, chicken, beef, potato or pumpkin. They’re typical Kyrgyz hot street snacks at bazaars and I found myself devouring them at road-stop eateries. They were the perfect snack anytime I felt peckish in between meals.

If you’re a fan of grilled skewered chunks of meat Shashlik is must-try dish when visiting Kyrgyzstan. Although it can be made from chicken, beef or fish the most common kind (and one I’d recommend the most) is skewered chunks of mutton. Sold on the street or served in restaurants it is very similar to shish kebab. One particular memory I have of eating Shashlik was with a group of friends where it tasted so good that almost all of us ended up ordering a second portion of it.

If you have trouble viewing this video click here: http://youtu.be/YcQZHdOEbFY

You know a drink is of utmost importance to a culture when the capital city (Bishkek) of your country is named after the paddle used to churn it! Kymyz (кымыз), a slightly alcoholic drink made from fermented mare’s milk might be an acquired taste for most foreigners sampling it for the first time. Audrey and I never quite warmed up to it but some other people traveling in our circle liked it instantly. As a fun fact, prior to fermentation mare’s milk has a whopping 40% more lactose than what you’d find in cow’s milk. 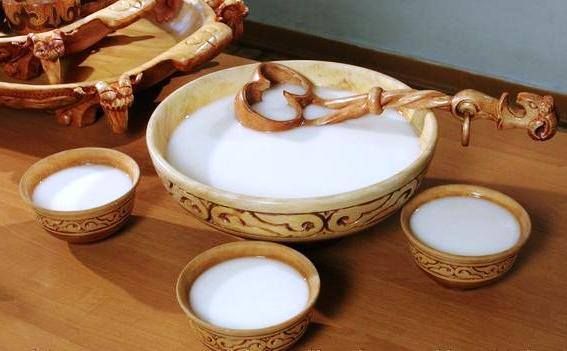 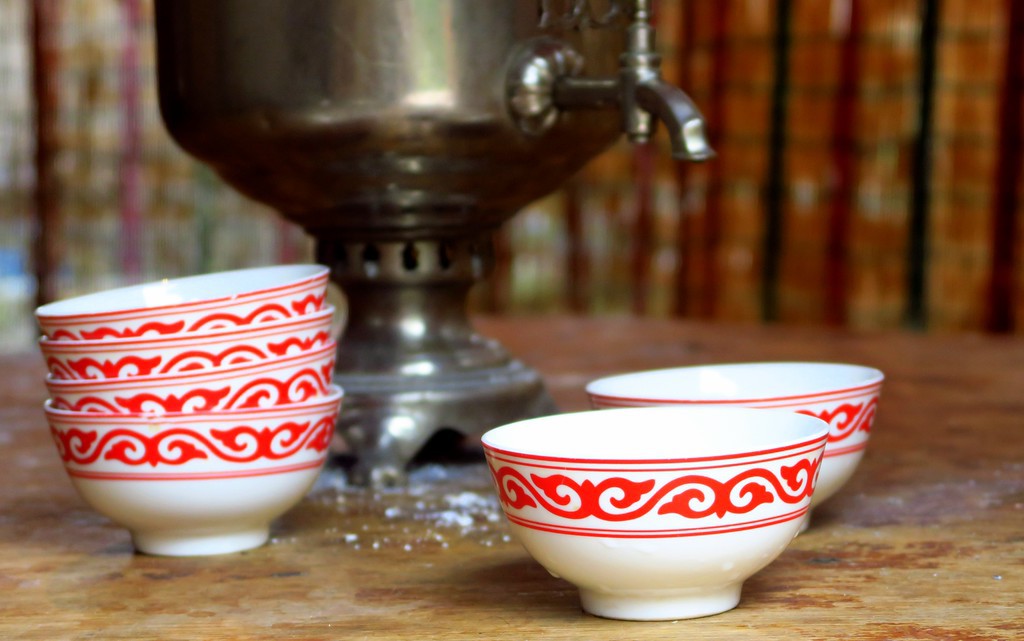 One of the highlights of my trip to Kyrgyzstan was having the opportunity to eat many meals inside of a yurt, especially tea time. Boorsoq, a popular fried dough bread, is typically dipped in jams, honey or butter and served with black tea. Kyrgyz hospitality is beyond generous and you’ll find your cup of tea being refilled constantly by an ever attentive host.Now it is your turn. Have you tried Kyrgyz food before and/or do any of these dishes leave you intrigued to try them for the first time? Let me know in the comments section below.

Food is being prepared at the World Nomad Games in Kyrgyzstan

This trip was made possible with the support of Discover Kyrgyzstan and USAID. As always, all opinions expressed here are my own.