Into the Tian Shan (part II)

From the Mag (C&K Winter 2016): Sam Sutton blurs through the first of three cracks in the “Eyes of God” gorge of Kyrgyzstan’s Sary-Jaz River. The channelized constriction of glacial high-volume flows marked the final test of a seven-day descent for an international team of some of the world’s best expedition kayakers this fall. Photographer Erik Boomer documents the full adventure through Central Asia’s Tian Shan Mountains, down the harrowing “Stikine-like” canyons in Part I, and shuttling out on a Soviet Mi-8 helicopter in this conclusion to his two-part photo essay. 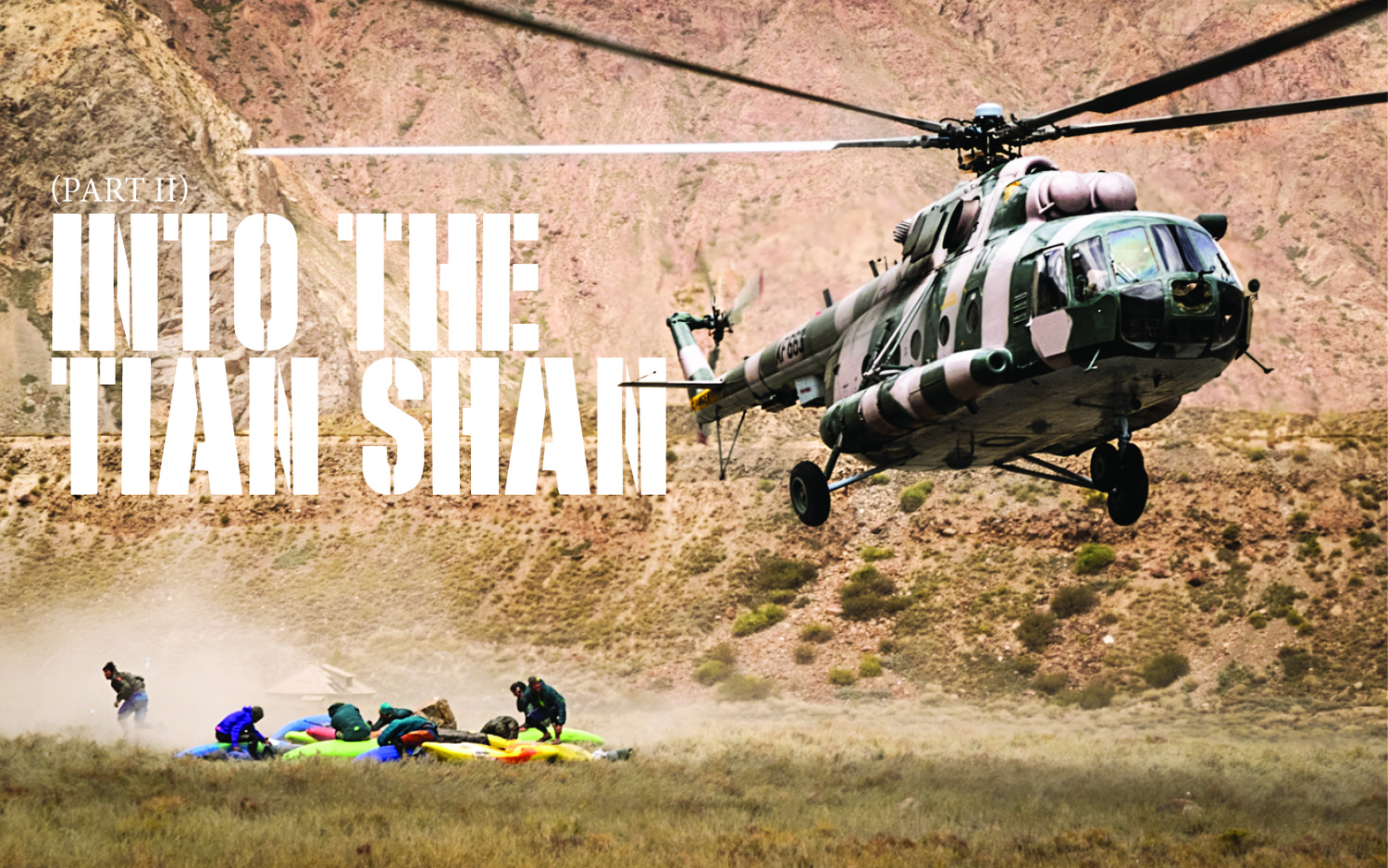 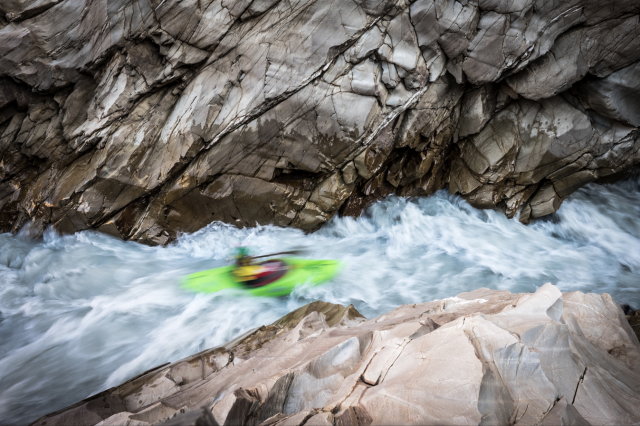 The takeout? Well, that was a little more confusing …First, we paddled to an old abandoned weather station — our helicopter pickup pad. Then from the weather station, we scouted the final “Eyes of God” gorge that leads into China.We camped at the weather station we named “cancer camp” because the asbestos roofing broken up all over the place. The wind would blow the dust around and we all became increasingly ready to get back to Bishkek. 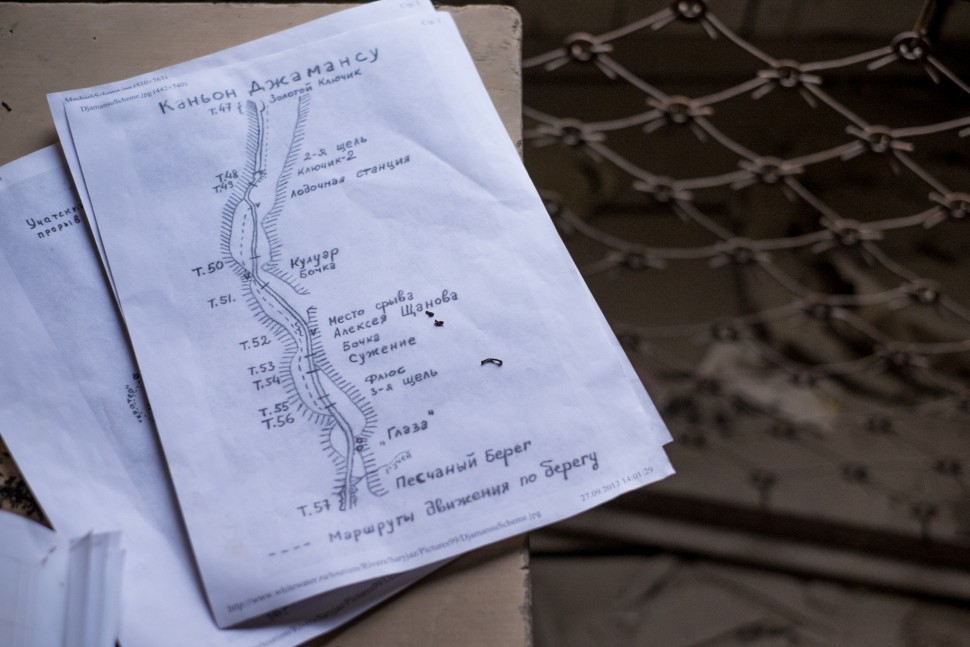 That trolley cart is a relic of the Soviet era. Whoever was posted at the weather station must have used it to cross the river. We were a bit worried at first and it took a lot of arm strength to turn the dial, but we used it to get back and forth across the river and to scout the canyon below. 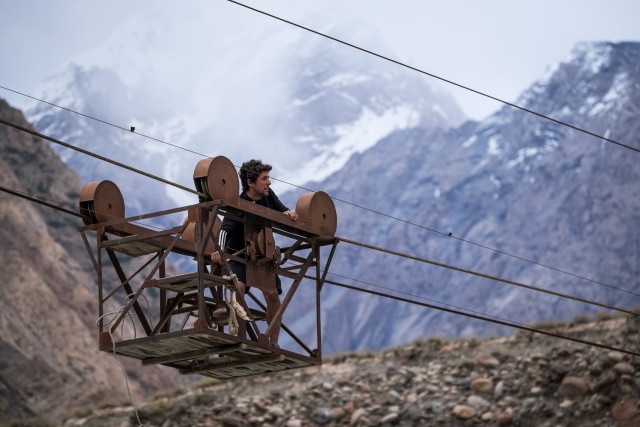 We figured out a way to paddle the rapids of the tight canyon to the Chinese border and still get back to the weather station afterward, saving a huge over-canyon hike. The catch was that we had to set up some Tyrolean (rope traverses), ferrying the kayaks back and forth, then climb back up to the abandoned weather station where, supposedly, the helicopter would come and pick us up. 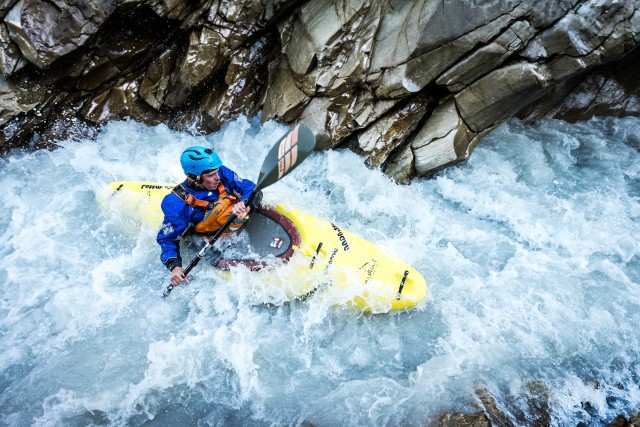 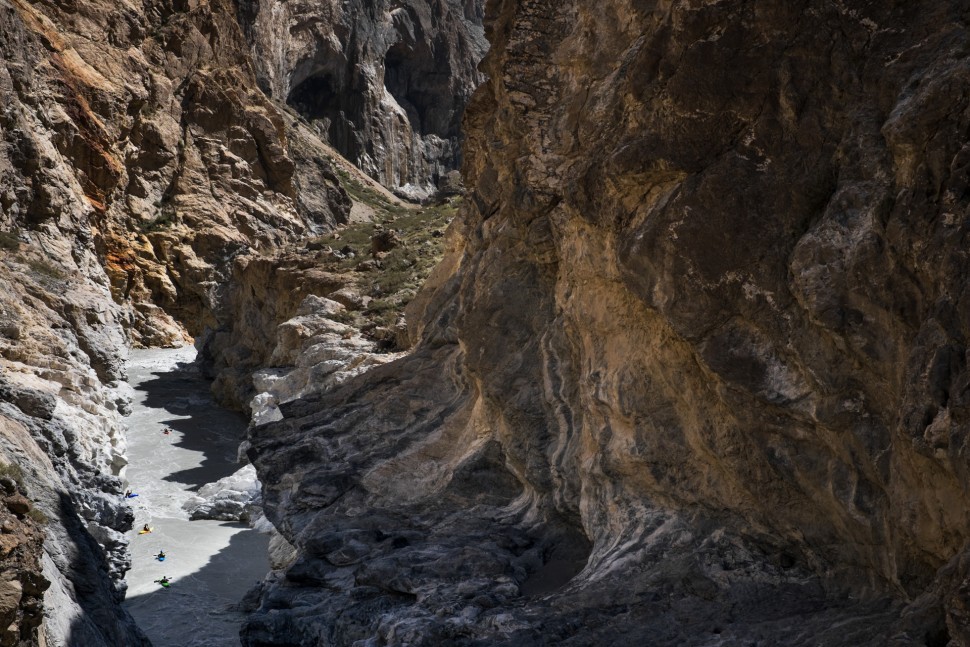 Though the Eyes of God lived up to their name — springs of water come out of each of the ‘eyes’ — getting back out of the canyon wasn’t as easy to visualize: *Ferrying up to cross the river, *climbing back up, and *making our way back down a steep section. *Some of the most challenging aspects of this river had to do with negotiating the sides of the river. Loose rocks and shifting shorelines were dangerous — I think some Russian rafters died because of accidents on shore. After the *hike out of the canyon it was a good mile or two back to the weather station. 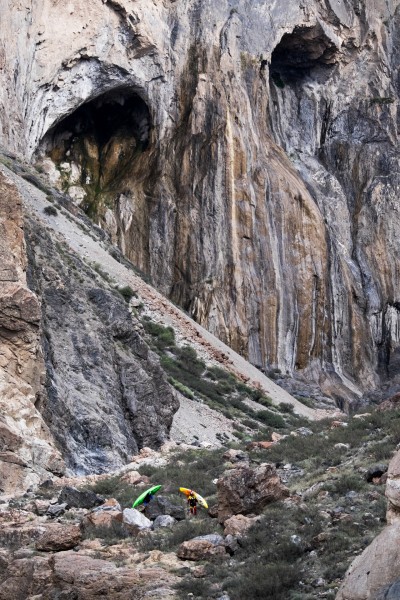 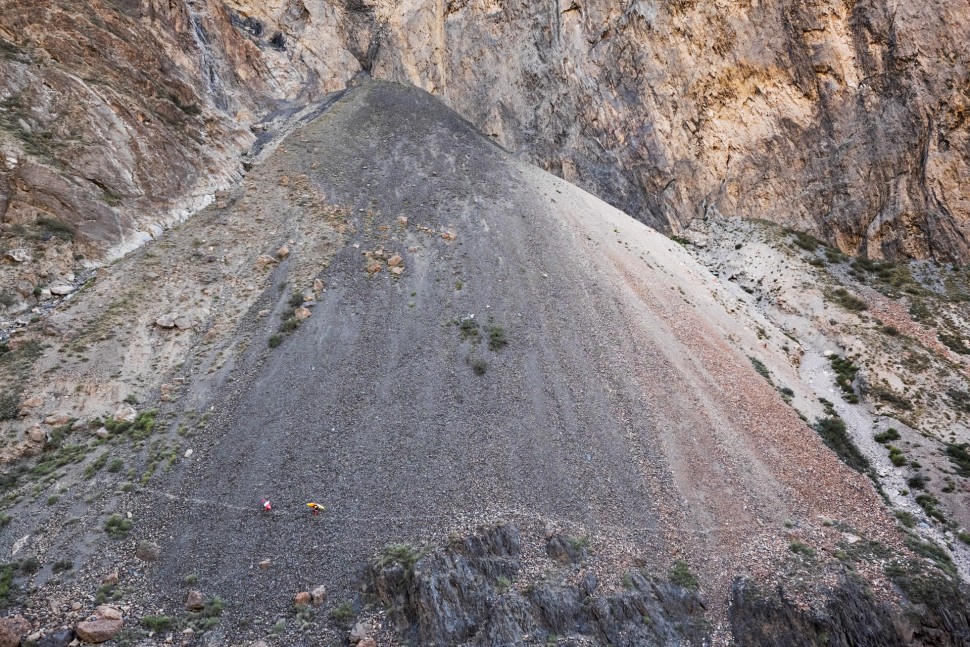 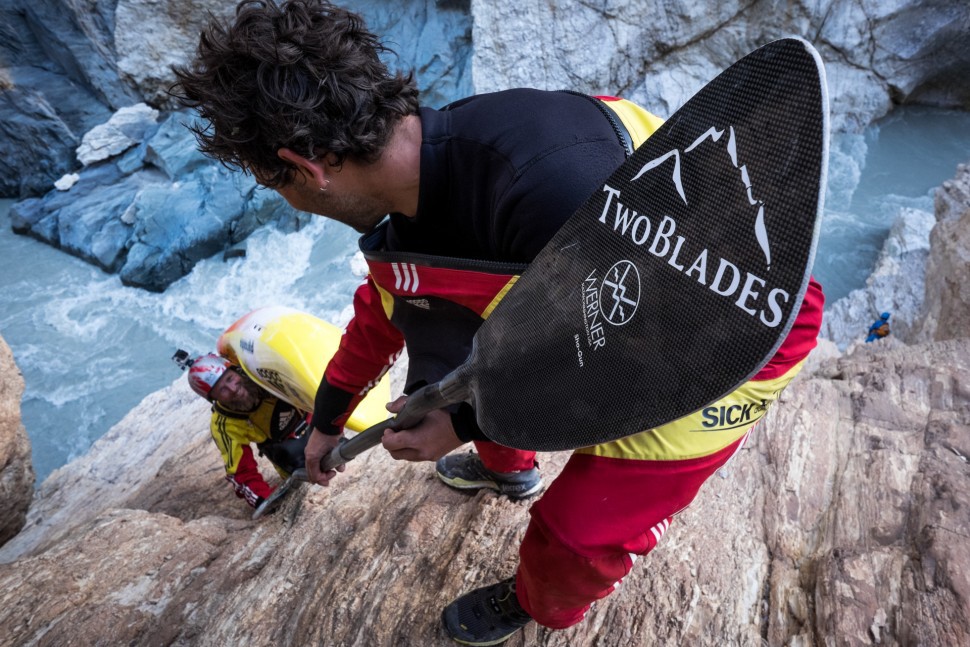 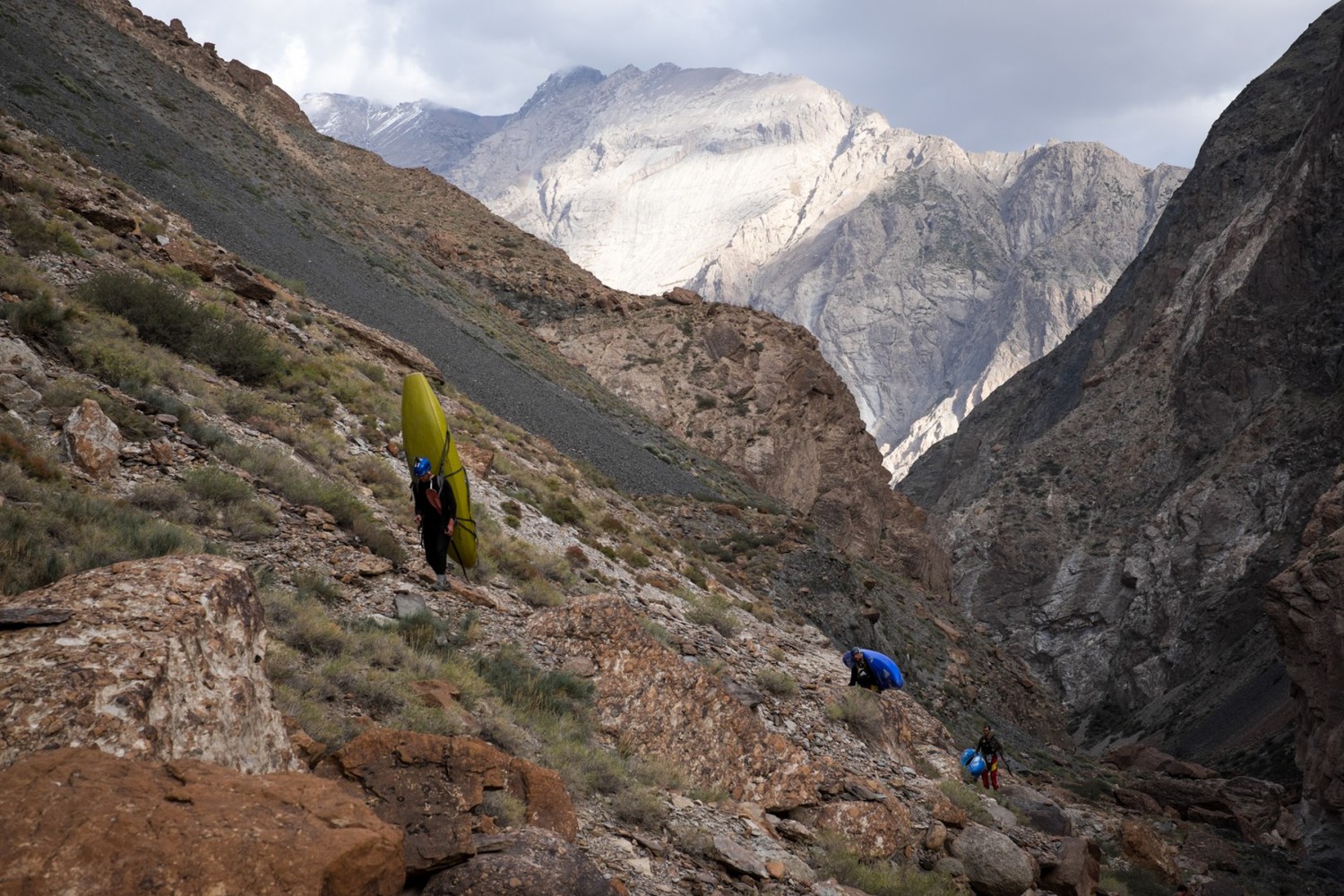 The most puckered I got the entire trip was definitely when the old Soviet-era Mi-8 helicopter came to pick us up. Apparently there used to be five of these helicopters in Kyrgyzstan. After some crashes in the past few years, however, there are now three. 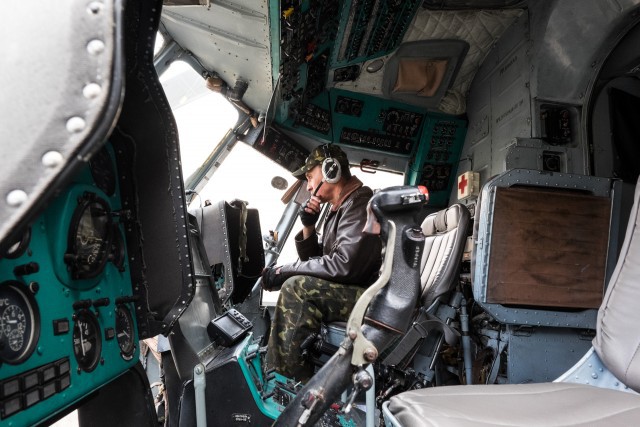 The helicopter landed right above the team and the rotor wash sent kayaks flying across the field. Once on the ground, four guys dressed in military garb got out and started joking around with us. Then we all loaded up boats and gear, climbed inside, and they turned the key to fire it up. There was nothing. The helicopter wouldn’t start! 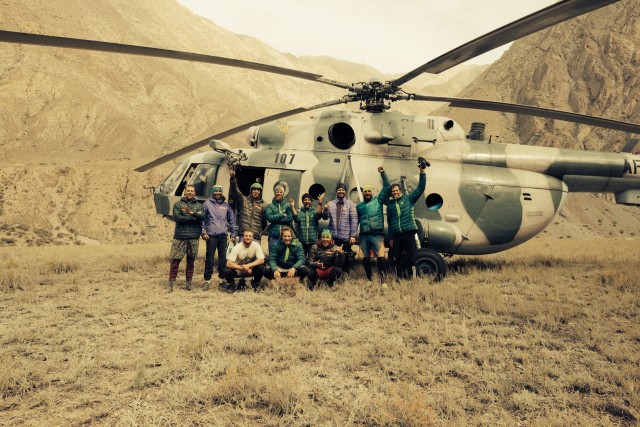 The crew promptly pulled out an oily toolkit, pulled a few panels off from the inside the cockpit, and banged a some engine pieces with a wrench. Soon after, without replacing the panels, they motioned for us to load back into the helicopter. We crossed our fingers as they fired up the engine — and then we crossed them even tighter as the pilot aggressively tilted the helicopter forward and accelerated back up the Sary-Jaz canyon just as bad weather started rolling in. 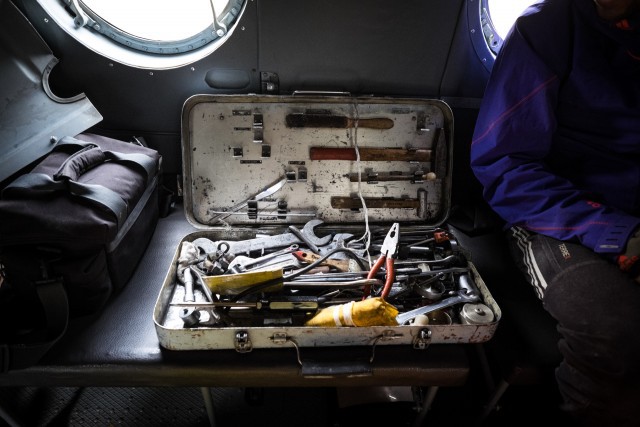 As we flew out, I immediately started thinking how much I want to go back. Kyrgyzstan has it all: culture, adventure, welcoming people and very few tourists. The river? Some of it must just go underground but, the going theory is that all that powerful water evaporates in a desert in China. 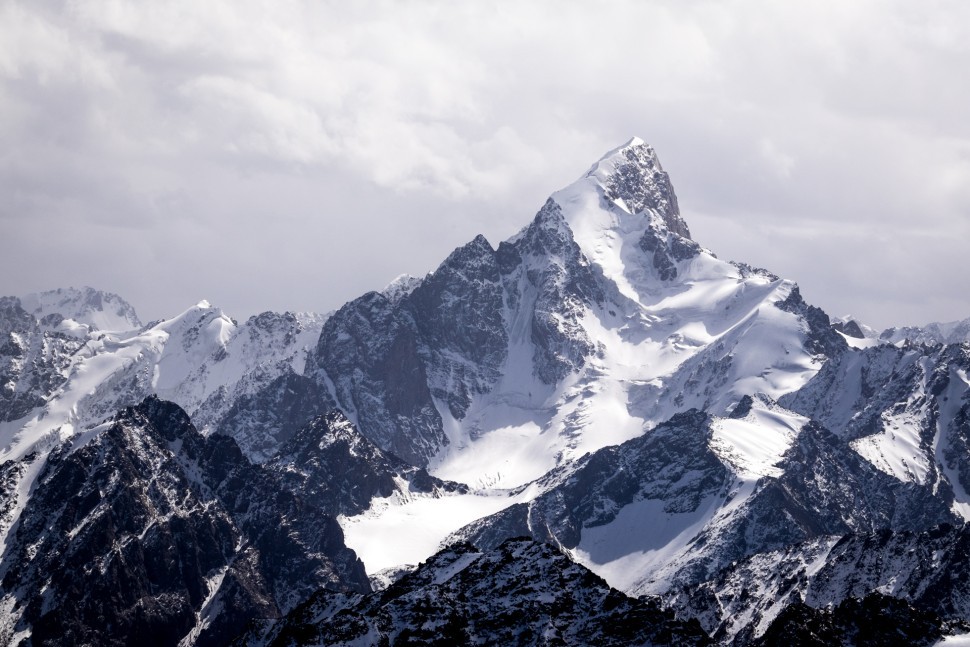